When you walk with The Lord

In the Light of His Word.
Oh the glory He sheds on our way.
Whilst we do His good will.
He abides with us still
And with all who will
Trust and Obey.

Walking with The Lord requires these two important factors; Trust and Obedience.
I am going to present you with the different examples of people that walked with the Lord according to His Word.

The First Man To Walk With God

In Genesis 1:26
The first man to walk with The Lord was Adam.
Adam had many privileges of being in the very presence of God; he had perfect peace, fullness pf joy, he basically dwelled within the abundance of His love.
Adam walked with God, talked with God pretty much every single day.
Furthermore God gave Adam dominion over all that was living, he had the power and the authority to name everything that The Lord had surrounded him with, God trusted Adam with what He had placed in his environment.

“Then God said, “Let Us make man in Our image, according to Our likeness; let them have dominion over the fish of the sea, over the birds of the air, and over the cattle, over all the earth and over every creeping thing that creeps on the earth.””
‭‭Genesis‬ ‭1:26‬ ‭

However Adam later lost the privileges He had, and he lost it all because he gave in to sin.
It was no longer easy to fellowship with God, and Adam had to work hard to taste even a glimpse of how it was when he dwelt in Eden.
Eden was taken away from the first man that dwelt with God due to disobedience, and if you read the following chapters of Genesis you will find out more about Adam and his walk with God.

Not only did disobedience take Adam away from the presence of God, but it also took eternity away from him.

“For the wages of sin is death, but the gift of God is eternal life in Christ Jesus our Lord.”
‭‭Romans‬ ‭6:23‬

As believers we must know the importance of obeying and trusting God’s Word, because not doing these things can have dire consequences on our destinies.
Remember the will of The Father is always perfect, and God can never lie to you what He says goes, so don’t allow any demon to twist His Word, do not allow the enemy to deceive you.

The First Man To Not Die 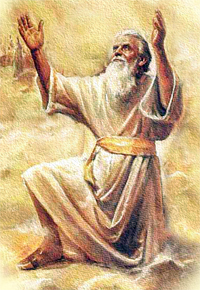 There was a man however in the same Genesis who walked with The Lord so much so that he did not die, rather The Lord just took him up to heaven.
Enoch is mentioned only briefly which brings a sense of mystery to his story, but although he is spoken so little off he is of great significance, why?
Because he walked in righteousness, which causes me to believe that there were not so many righteous people during Enoch’s time, and Enoch must have been exceptionally set apart for Te Lord.
(I just want to note that there are many theories of Enoch but I want to encourage you to believe only what it says in The Word of God).

The Son That Made No impact And Left No Legacy

Now Enoch had a son called Methuselah and he is the longest living human being to have ever been recorded in the bible.
Like his father the bible mentions little of him, but the little that is mentioned of him is of no significance, there is no legacy, and it’s due to the fact that walking with the Lord is not mentioned when it comes to him.

And that’s it Methuselah lived many years and died. What’s the point of living without leaving a legacy, without making an impact, without walking with The Lord.
The many years that Methuselah lived on earth does not equate to eternity.
Enoch inherited eternity because he walked in righteousness, but what did Methuselah inherit? Well the bible just says that he died.
It’s amazing that Methuselah did not walk in his father’s footsteps.
We must strive for righteousness and to live a life that’s pleasing to The Lord, we are now privileged to live in this new dispensation whereby Jesus died to save us all from sin, we have the choice to choose sin(death) or to choose obedience/righteousness(life, eternity).
We thank God for His grace let’s make the right decisions and walk in the complete promises of God like Adam did before he sinned let’s walk in dominion and authority, let’s walk in righteousness like Enoch, so that we to can inherit eternal life.

The Imperfect Man Whom Found Favour in God

Another well known man that walked in righteousness was a man that like every man and woman in the bible just like you and I that was not perfect. He was the first man in Genesis that happened to like a drink or two 😄, and he got drunk.
This man was called Noah.
Lamech the father of Noah knew that his son would be a great man of God, and that to did come to pass.
Noah walked in righteousness and because of that he obtained favour from The Lord.
Genesis 6:8.
The Lord entrusted Noah to carry out His work because again Noah obeyed God.
I cannot stress enough on how much obedience and trust is key when it comes to walking with The Lord.
Noah was building an ark in a rebellious time just like the time in which we are living now, he was ridiculed but continued earning the people and built the ark.
Noah trusted God even whilst on the ark itself with hopelessness all around him, there must have been times of uncertainties but Noah still trusted God.

In the midst of the storm, doubt, fear, hopelessness, ridicule, and uncertainty always, and I mean always put your trust in God knowing that whatsoever He has begun He shall surely being it into completion.

The Man Of Great Faith

Abraham obeyed God, and he acted on the the Word of god instantly. He did not procrastinate wasting time like most believers do today, he just believed its no wonder why God blessed him beyond measure!
God told Abraham to leave his home to go to a land that he did not know, and Abraham being a great man of faith obeyed God. Abraham obeyed God on many occasions even the most outlandish of things Abraham obeyed.
The more we walk with God the more we are exercising our faith, and as we are doing so The Lord establishes his covenant with us, but it al depends on how quickly we act upon our faith in The Lord.

Lately I have been reading a book called ‘A Life Ablaze With The Power Of God.’ This book is based on the life of a great minister of the 20th century whose name is called Smith Wigglesworth.
I am so glad to be reading about the life of this powerful Pentecostal preacher, and I would encourage every believer to read about Smith Wigglesworth and find out all that was about.

Smith Wigglesworth was a man of prayer, he had the habit of constantly walking and talking with The Lord, he made it his lifestyle, and influenced others whereby others whom were convicted by what they saw.
He made an impact, he empowered because he was first filled with the raw fire of God, the power that enabled him to heal in the name of Jesus.
He was bold and feared no one because he walked so closely with God, and he refused to be distracted.
Smith Wigglesworth was focused, and he walked in the perfect peace he knew he had through Jesus Christ.
He made sure he held on to all that The Lord had promised him.
He was also a man of compassion, humility, and brokenness and without these things we cannot expect to see the fullness of God’s power in our lives, that is why we must make sure that we are walking in the fruits of the Spirit.

Wigglesworth walked and talked with God, and he didn’t ask anyone’s permission to do so.

In 2017 I urge you to take time to walk with The Lord, talk to Him at all times, make it a habit to spend quality time with Him in the secret place.
Let The Lord be your all in all, and when you do you shall inherit all His promises.
Remembering though these three important factors obedience, righteousness, and trust in The Lord is what will take you to where The Lord wants you to be.

God bless you as you do so in Jesus Name, and may The Lord help us all as we embark on this beautiful, strengthening, and life changing journey of purity and righteousness.

“Blessed are the pure in heart, For they shall see God.”
‭‭Matthew‬ ‭5:8‬