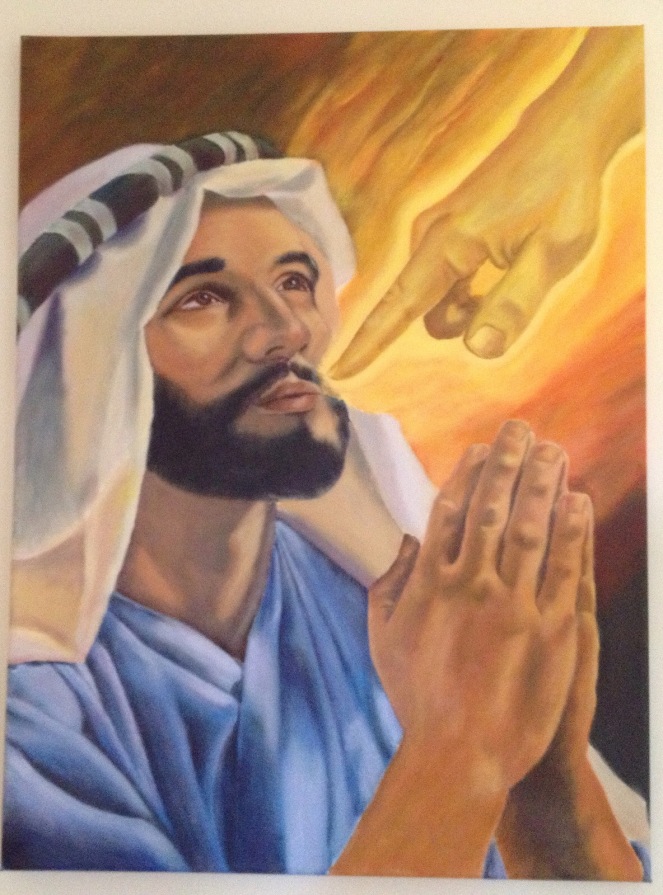 “Woe to the shepherds who destroy and scatter the sheep of My pasture!” says the LORD. Jeremiah 23:1
Therefore thus says the LORD God of Israel against the shepherds who feed My people: “You have scattered My flock, driven them away, and not attended to them. Behold, I will attend to you for the evil of your doings,” says the LORD. Jeremiah 23:2
I will set up shepherds over them who will feed them; and they shall fear no more, nor be dismayed, nor shall they be lacking,”says the LORD. Jeremiah 23:4
“Behold, the days are coming,” says the LORD, “That I will raise to David a Branch of righteousness; A King shall reign and prosper, And execute judgment and righteousness in the earth. Jeremiah‬ ‭23‬:‭5‬
In His days Judah will be saved, And Israel will dwell safely; Now this is His name by which He will be called: THE Lord OUR RIGHTEOUSNESS. Jeremiah‬ ‭23‬:‭6
Jeremiah prophesied of our Lord and Saviour Jesus Christ.

My heart within me is broken Because of the prophets; All my bones shake. I am like a drunken man, And like a man whom wine has overcome, Because of the LORD, And because of His holy words. Jeremiah‬ ‭23‬:‭9‬
A true prophet of God is often despised, because he speaks God’s Word and God’s Word is Truth, and His Truth is sharper than any two edged sword. That was Jeremiah, a young man whom God used to prophesy in a most difficult time. Very few prophesy Truth. It takes boldness, trust and faith in God. He has called many to speak the truth in these last days but they hold back His Word because of fear, and many compromise it to please others.

“For both prophet and priest are profane; Yes, in My house I have found their wickedness,” says the LORD. Jeremiah‬ ‭23‬:‭11‬ “And I have seen folly in the prophets of Samaria: They prophesied by Baal And caused My people Israel to err. Jeremiah‬ ‭23‬:‭13‬

God called Jeremiah to prophesy to a stiff necked generation. I cannot even begin to comprehend how difficult that must’ve been for him. At times Jeremiah wished that he was not even born, because many persecuted him for speaking the truth. Even so called ministers of God.

Cursed be the day in which I was born! Let the day not be blessed in which my mother bore me! Jeremiah 20:14

Also I have seen a horrible thing in the prophets of Jerusalem: They commit adultery and walk in lies; They also strengthen the hands of evildoers, So that no one turns back from his wickedness. All of them are like Sodom to Me, And her inhabitants like Gomorrah. Jeremiah‬ ‭23‬:‭14

Jeremiah a young man that God used to prophesy lived in a time like Sodom and Gommorah. A time that is no different from what we are living in, in these last days.

The words of Jeremiah the son of Hilkiah, of the priests who were in Anathoth in the land of Benjamin, Jeremiah‬ ‭1‬:‭1‬

to whom the word of the LORD came in the days of Josiah the son of Amon, king of Judah, in the thirteenth year of his reign. Jeremiah‬ ‭1‬:‭2‬

Then the word of the LORD came to me, saying: Jeremiah‬ ‭1‬:‭4‬
“Before I formed you in the womb I knew you; Before you were born I sanctified you; I ordained you a prophet to the nations.” Jeremiah‬ ‭1‬:‭5‬

But the LORD said to me: “Do not say, ‘I am a youth,’ For you shall go to all to whom I send you, And whatever I command you, you shall speak. Jeremiah‬ ‭1‬:‭7‬

Do not be afraid of their faces, For I am with you to deliver you,” says the LORD. Jeremiah‬ ‭1‬:‭8‬

Then the LORD put forth His hand and touched my mouth, and the LORD said to me: “Behold, I have put My words in your mouth. Jeremiah‬ ‭1‬:‭9‬
See, I have this day set you over the nations and over the kingdoms, To root out and to pull down, To destroy and to throw down, To build and to plant.” Jeremiah‬ ‭1‬:‭10‬

God called him, but he was afraid. Why should The Lord call you at such at time as this? It is said that God is not a respecter of persons, but I also believe that He is not a respecter of situations. Imagine The Lord is telling you to speak during a time of captivity. He calls you when He wants, and whenever He pleases. Situations do not hinder God. So never see your age as a hindrance. He said to Jeremiah that He knew him even before He was formed in his mother’s womb. God is raising up leaders, prophets, pastors, and teachers amongst the youth. Believe He has called you at such a time as this. Jeremiah was afraid, but He still believed. He did not give up, he trusted and obeyed God and God never left him. Prophecy is not of the flesh but of The Spirit. If His Spirit does not go before you, then you must not go before Him. But that’s what many did then, and they are still doing it now. Many do not wait to hear from The Lord. Jeremiah obeyed God, despite the circumstances he was in despite the many false teachers around him. Jeremiah the young prophet waited on God, and he could not but help to utter the words in which The Lord put in his mouth.

Then I said, “I will not make mention of Him, Nor speak anymore in His name.” But His word was in my heart like a burning fire Shut up in my bones; I was weary of holding it back, And I could not. Jeremiah 20:9

That is what is needed in these last days.
“ Is not My word like a fire?” says the LORD, “And like a hammer that breaks the rock in pieces? Jeremiah 23:29
“Therefore behold, I am against the prophets,” says the LORD, “who steal My words every one from his neighbour. Jeremiah 23:30
Behold, I am against the prophets,” says the LORD, “who use their tongues and say, ‘He says.’ Jeremiah 23:31
Behold, I am against those who prophesy false dreams,” says the LORD, “and tell them, and cause My people to err by their lies and by their recklessness. Yet I did not send them or command them; therefore they shall not profit this people at all,” says the LORD. Jeremiah 23:32
In these last days be very weary of false prophets, for there are many.
These false prophets will either tell you what your itching ears want to hear, or they will confuse what is already familiar to you which is of no use to you, instead of confirming the Word of God in order to help you. Be very very careful of false prophets be discerning in Spirit, and do not be so easily deceived. The work of The Lord should not be easy, it shouldn’t because you are called to speak that which is not pleasing to the world. The world does not want to hear that what they are doing is wrong, and that if they do not turn away from it they will go to hell. We have been called to bring lost souls to salvation, not to sugarcoat the gospel to please them so we can lead them to hell. We have not been called to lead people astray.

God called Jeremiah the young prophet to warn His people, so that they might return back to Him. They try to erase what God said to try to suit the times.They say we must move on. No! You must move back to what God said. We are all responsible for our own salvation, God said we must work it out with fear and trembling. God will judge false teachers, and prophets.

I have come across preachers that only ever preach on prosperity, and make you feel guilty for not having the huge amount that they claim The Lord has instructed them to ask the congregation to give. I have come across prophets that only pray if you pay, if you don’t pay the great amount that they have asked for then apparently they do not have a Word from God for you. Excuse me?! Where exactly is that in the bible? No teacher, preacher, prophet ever scammed a child of God. Offerings, sacrifices, and tithes were made according to what the people had they gave and The Lord saw their hearts. I have come across preachers who come to preach about material things, they come to boast to dampen your spirit instead of coming to preach God’s Word to uplift and convict your spirit. What is going on?! Be very aware in these last days, do not allow anyone to deceive you. I have come across television evangelists who claim that there is power in material things. I was watching one of the God channels a while back, and there was this ‘prophet’ who had a handkerchief, this handkerchief had a £50 note on it apparently if you use this handkerchief you will prosper.😳😒 What are we allowing in the body of Christ? How can we allow people to make a mockery of the gospel?

We have been sent to preach the good news and that’s it, not to compromise to bring the world to salvation.  Conviction is something that only our Lord Jesus Christ can do. You know I am so tired of seeing servants of God being more interested in fame than they are bringing lost souls to salvation. The world needs salvation in these last days! If you are doing God’s work then you better do it for God, and not to please man. I’m not interested in who your famous friends are, just do what God has called you to do. Being asked about who goes to heaven, and you can’t answer it then why should I call you a pastor? Titles are given so easily these days, God is watching you. Pride is so dangerous, it can easily be infected in anyone that becomes so well known. Be very careful.

Pride goes before destruction, And a haughty spirit before a fall. Proverbs 16:18 Better to be of a humble spirit with the lowly, Than to divide the spoil with the proud. Proverbs 16:19

For the time will come when they will not endure sound doctrine, but according to their own desires, because they have itching ears, they will heap up for themselves teachers; 2 Timothy 4:3 and they will turn their ears away from the truth, and be turned aside to fables. 2 Timothy 4:15

God bless you, and do not be afraid for The Lord is with you. Do that which The Lord has called you to do.🔥😊❤️🙌🙏
Dedicated to P.JJ☺️