Skip to content
No matter how difficult it may be, be sure to first seek the counsel of God.
You will have NO regrets. 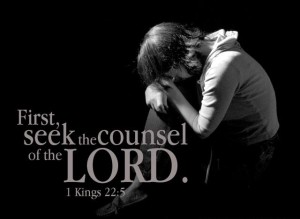 “Now a certain man of the sons of the prophets said to his neighbor by the word of the LORD, “Strike me, please.” And the man refused to strike him.”
‭‭I Kings‬ ‭20:35‬
“Then he said to him, “Because you have not obeyed the voice of the LORD, surely, as soon as you depart from me, a lion shall kill you.” And as soon as he left him, a lion found him and killed him.”
‭‭I Kings‬ ‭20:36‬
“And he found another man, and said, “Strike me, please.” So the man struck him, inflicting a wound.”
‭‭I Kings‬ ‭20:37‬
“Then the prophet departed and waited for the king by the road, and disguised himself with a bandage over his eyes.”
‭‭I Kings‬ ‭20:38‬
“And he hastened to take the bandage away from his eyes; and the king of Israel recognized him as one of the prophets.”
‭‭I Kings‬ ‭20:41‬
“Then he said to him, “Thus says the LORD: ‘Because you have let slip out of your hand a man whom I appointed to utter destruction, therefore your life shall go for his life, and your people for his people.’ ””
‭‭I Kings‬ ‭20:42‬
“So the king of Israel went to his house sullen and displeased, and came to Samaria.”
‭‭I Kings‬ ‭20:43‬ ‭
Thank God for His mercy!
Wow as I was reading this scripture in 1 Kings which talks about a prophet that instructed a man to strike him, and because he disobeyed a lion killed the man😁😳.
Imagine if that was you, because think about it would you really agree to striking someone?
What would you have done in this man’s position?
Again the prophet came to another man asking him to do the same thing, and he did.
Nothing happened to this man, and I believe this man discerned that this was a prophet from God.
In this scripture it also says nothing about the prophet dying from the strike that he had enquired for.
Sometimes The Lord may ask you to do the most strangest things, and it may not necessarily  be the same as what was asked of these men but it may be something that is out of your comfort zone, or something that may cause you to believe that it is the devil talking.
Brethren, it is not always the devil that is talking to you when a voice tells you to do something that is beyond you like leave your home to live in a country that you know nothing about. 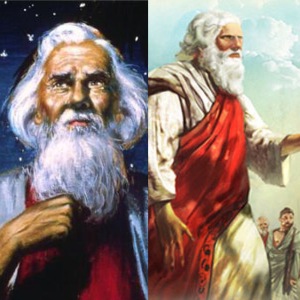 That takes some crazy amount of faith, but Abraham obeyed because he knew the voice of God.
Brethren we must come to a point whereby we know the voice of God.
In these last days discernment is key, be sure of the voice of God.
When you hear His voice you will not always feel comfortable why, because His Word is sharper than a two edged sword.
Why did the prophet ask to be stricken?
Well it could be that the Lord wanted to use the prophet to symbolise that the sins of the people are like that of a self stricken wound.
Perhaps The Lord wanted to demonstrate how their sins have provoked Him to anger.
God works in mysterious ways, His ways are higher than ours and I refuse to try to figure God out.
We must come to a place whereby we realise that God is God.
I believe the second man that the prophet asked to strike him knew the voice of God, and just obeyed.
The prophet did not ask him to kill him but to strike him.
“Christ has redeemed us from the curse of the law, having become a curse for us (for it is written, “Cursed is everyone who hangs on a tree”),”
‭‭Galatians‬ ‭3:13‬
Brethren, let us pray for the spirit of discernment and also for his mercy.
“Then Micaiah said, “Therefore hear the word of the LORD: I saw the LORD sitting on His throne, and all the host of heaven standing by, on His right hand and on His left.”
‭‭I Kings‬ ‭22:19‬
“And the LORD said, ‘Who will persuade Ahab to go up, that he may fall at Ramoth Gilead?’ So one spoke in this manner, and another spoke in that manner.”
‭‭I Kings‬ ‭22:20‬
“Then a spirit came forward and stood before the LORD, and said, ‘I will persuade him.’”
‭‭I Kings‬ ‭22:21‬
“The LORD said to him, ‘In what way?’ So he said, ‘I will go out and be a lying spirit in the mouth of all his prophets.’ And the LORD said, ‘You shall persuade him, and also prevail. Go out and do so.’”
‭‭I Kings‬ ‭22:22‬
“Therefore look! The LORD has put a lying spirit in the mouth of all these prophets of yours, and the LORD has declared disaster against you.””
‭‭I Kings‬ ‭22:23‬
How can a lying spirit be sent from God to confuse the enemy?
But it can, and it has happened.
Brethren that scripture is deep you know, I don’t think we as of yet understand the wrath of God because of Grace.
We can only thank God for grace, but we must not forget that there will be judgement.
God knows, and sees our heart’s, He cannot be deceived.
One can be so far gone in sin that they can be easily deceived, be very careful.
Listen to God, without God we are nothing.
Remember however that God is merciful, even when a sinner like Ahab was humble before The Lord, The Lord was moved by his humility to repent, and so God had mercy on Ahab.
“So it was, when Ahab heard those words, that he tore his clothes and put sackcloth on his body, and fasted and lay in sackcloth, and went about mourning.”
‭‭I Kings‬ ‭21:27‬
“And the word of the LORD came to Elijah the Tishbite, saying,”
‭‭I Kings‬ ‭21:28‬
““See how Ahab has humbled himself before Me? Because he has humbled himself before Me, I will not bring the calamity in his days. In the days of his son I will bring the calamity on his house.””
‭‭I Kings‬ ‭21:29‬
Isn’t it also humbling to know that though Elijah was a great prophet of God, there were also many other great prophets.
Let us not forget the time whereby Elijah was very low in spirit, he was discouraged, and because of his discouragement he exaggerated that he was the only prophet alive😄.
“Then Elijah said to the people, “I alone am left a prophet of the LORD; but Baal’s prophets are four hundred and fifty men.”
‭‭I Kings‬ ‭18:22‬
“And there he went into a cave, and spent the night in that place; and behold, the word of the LORD came to him, and He said to him, “What are you doing here, Elijah?””
‭‭I Kings‬ ‭19:9‬ ‭
“So he said, “I have been very zealous for the LORD God of hosts; for the children of Israel have forsaken Your covenant, torn down Your altars, and killed Your prophets with the sword. I alone am left; and they seek to take my life.””
‭‭I Kings‬ ‭19:10‬
“Yet I have reserved seven thousand in Israel, all whose knees have not bowed to Baal, and every mouth that has not kissed him.””I Kings 19:18
It’s funny, but often we do the same thing, especially when The Lord has called us to show forth His glory.
I just wanted to encourage you this morning to discern, to repent, to know God, and to trust Him.
God bless you.☺🙏